CREST was established by the Sahaj Marg Spirituality Foundation (SMSF) with the purpose of exposing participants to a variety of religions, cultures, philosophies, and ideologies. The aim is to inspire an appreciation both of the multiplicity of approaches to the divine and of their single underlying essence. Participants are practicing members of the Shri Ram Chandra Mission (SRCM), who reinforce their own sadhana as they widen their understanding.

CREST is set up according to the ancient gurukula concept, where trainees reside in an ashram. Material conditions are plain, but the environment is spiritually enriched. Various parts of the program address the different aspects of human existence--physical, intellectual, moral, and spiritual.

The mission statement of CREST is given below.

“God has been of perennial interest to humanity. He has been the subject of deep thought, discussion and description in human history. Many a Master in the human annals had experienced HIM and taught the succeeding generations the methods of reaching HIM. These spiritual practices have later crystallized into religions. Amidst a welter of religions the Quest for the Spirit has survived and is continuing. It is unique. SAHAJ MARG is this unique Quest for the Spirit and incorporates in itself the quintessence of the ageless wisdom of humanity.”

Click on the link(s) below for information about CREST in India:

On June 18, 2014, Kharagpur was designated as the third retreat centre for India. This facility which was serving as a CREST institute will here onwards be a retreat centre, to primarily serve the needs of abhyasis from the Northern and Eastern parts of the country. 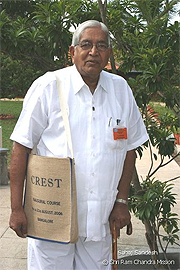 “We don’t leave life behind; we leave that form of life in which life was ensconced, entrapped behind, to come out into the pristine values of air, water and sunshine, and glory in that and make others glory in our presence.”