Shri Kamlesh D. Patel (affectionately known as Daaji) was born in Gujarat, India. From an early age he was interested in spirituality and meditation, and eventually came to the feet of his Guru, Shri Ram Chandra of Shahjahanpur (Babuji), the founder-president of Shri Ram Chandra Mission, while still a student of pharmacy in Ahmedabad in 1976. After graduating, he moved to the USA, and became a successful pharmacist in New York City, while continuing the practice of Sahaj Marg meditation with great devotion. After the mahasamadhi of Babuji in 1983, Daaji continued as the devotee of Shri Parthasarathi Rajagopalachari (Chariji), Babuji's successor and the second president of Shri Ram Chandra Mission. During the last twenty years, he has held a number of responsible roles within SRCM, and was announced as Chariji's successor in October 2011, and given the position of vice president of SRCM in August 2012.

Following the mahasamadhi of Chariji on the 20th December 2014, he is now the spiritual Master of the Sahaj Marg system of raja yoga meditation and president of SRCM.

Daaji is married with two sons. He is a prolific speaker, and is a role model for students of spirituality who seek that perfect blend of Eastern heart and Western mind. He has travelled extensively and is at home with people from all backgrounds and walks of life, giving special attention to the youth of today. 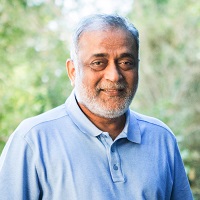