Shri Parthasarathi Rajagopalachari (affectionately known as Chariji) was born in Vayalur, near Chennai, in the south of India. His father, Shri C. A. Rajagopalachari, was a railway executive. He lost his mother, Janaki, when he was barely five years old, shortly after the birth of his sister, who also died a few years later. Parthasarathi and his two younger brothers were brought up with great care by their father. Nonetheless, the loss of his mother had a profound effect upon the young Parthasarathi, leaving an emptiness that followed him into adulthood.

Having studied in the Western system in North India, Chariji graduated from Benaras Hindu University with a Bachelor of Science degree. His first job was with Indian Plastics Limited in chemical engineering. He travelled abroad in this capacity and spent two years in Yugoslavia studying plastics manufacturing techniques. He married Sulochana in 1955 and two years later their son, Krishna, was born. It was also in 1955 that Chariji joined the T. T. Krishnamachari group of companies, soon rising to the position of executive director in one of the group companies. His work required him to travel extensively in India and abroad, establishing a pattern of world travel that he would continue throughout his life and contributing to his development on many levels, both practical and spiritual.

Chariji’s spiritual aspirations were awakened at the age of eighteen when he heard a lecture on the Bhagavad Gita, after which he took up a detailed study of religious and spiritual texts, and started meditating on his own. At the age of thirty, he began Vaishnava traditional instruction in the Hindu religion, with a keen focus on yoga, philosophy, religion and spirituality.

It was seven years later, in 1964, that he met Shri Ram Chandra of Shahjahanpur (Babuji) and began the practice of Sahaj Marg meditation, receiving transmission for the first time. Babuji’s spiritual guide, Ram Chandra of Fatehgarh (Lalaji), had rediscovered this ancient art of yogic transmission in the late nineteenth century, thereafter passing it down through the lineage of Sahaj Marg Masters. Through transmission, the living Master is able to introduce the subtlest energy of his own spiritual condition into the heart of the aspirant for the purpose of inner development. It was Babuji’s conviction that, “where religion ends, spirituality begins,” and it was under his guidance that Chariji’s spiritual journey began in earnest.

While continuing to fulfill his familial and business responsibilities, Chariji was vigilant in his spiritual practice and dedicated to the work of Shri Ram Chandra Mission. As general secretary of the Mission, he contributed greatly to its growth worldwide and to the publication of Sahaj Marg literature. Over the years, he became Babuji's most devoted disciple, ably assisting him in his spiritual work.

A constant companion to Babuji on his spiritual tours, Chariji travelled globally, explaining the Sahaj Marg system of spirituality to interested seekers and inspiring many to begin the practice of Sahaj Marg. There have been around one hundred publications of his talks and writings over the years, revealing his deep love for his Master, his Mission and the method. His book My Master, a personal tribute to Babuji, has been published in nearly twenty languages. His other books include diaries of his overseas travels with Babuji, an autobiography and numerous volumes of his talks in India and abroad.

Babuji characterised the ideal human being as a person having "a Western mind and an Eastern heart," adding that such a person would be needed to guide the Mission successfully into the future. Babuji appointed Chariji as his spiritual representative and successor to carry on his work as President of the Shri Ram Chandra Mission, a role Chariji assumed when his Master departed this world in 1983 and to which he devoted every moment of his life up until his mahasamadhi in 2014. Chariji's unceasing work and frequent tours abroad have fostered remarkable expansion of the Mission's activities, which now include the education of youth, scholarship programs, free health care clinics and an association with the Department of Public Information of the United Nations (UN DPI). His spiritual work always embraced all of humanity, addressing current needs as well as those anticipated in the future.

In Sahaj Marg it is understood that the Master is the greatest servant. Observing Chariji, one could always see this principle in action. His entire existence was devoted to the cause of spirituality in the service of others, a service that he undertook with unwavering faith in the divine support of his Master. 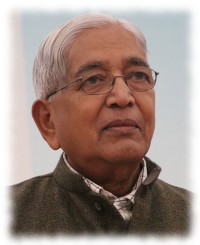 “A growing lightness of mind and spirit is the surest test of spiritual progress.”

“First you have to learn to love yourself. That is why perhaps we meditate on our own heart: we learn to love what we find inside.”

“Turn within. All Knowledge, all powers, everything is within. Your destiny is within, your future is within, and the ultimate is within.”